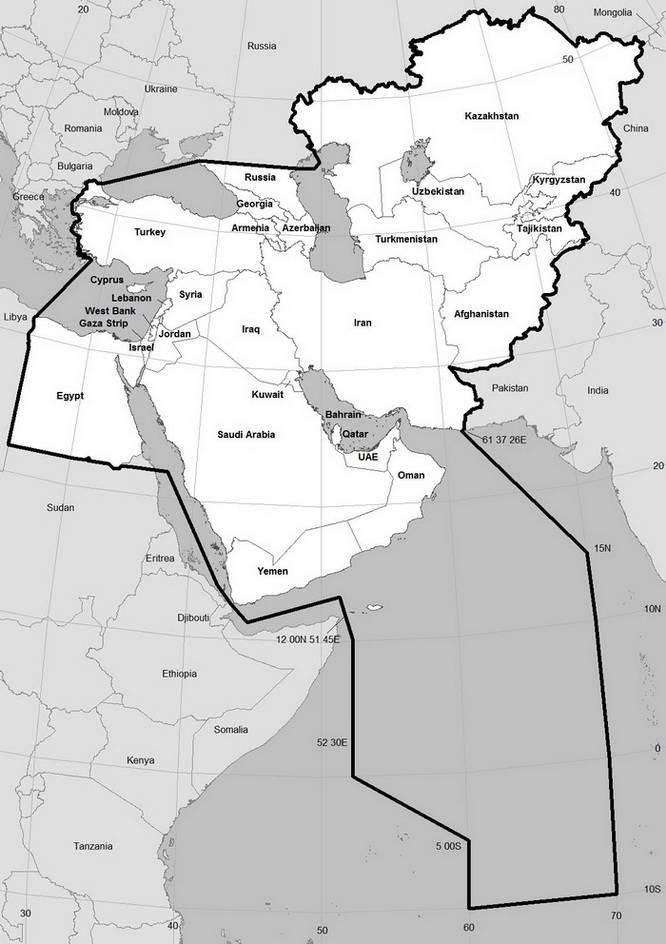 NB Some small islands, particularly in the southern Red Sea near Bab-el-Mandab, may require the sketched line of the OSME Region boundary to differ from that shown.

The map above does not represent precise political boundaries nor does it support any opinion where these are in dispute. It outlines the OSME Region, an ornithological concept which includes the Middle East, the Caucasus and Central Asian republics. The Region contains 35 countries or territories, namely: Egypt, Cyprus, Turkey (including European Turkey), Syria, Lebanon, Israel, Gaza, Jordan, Saudi Arabia, Yemen (including the Socotra archipelago), Oman, United Arab Emirates, Qatar, Bahrain, Kuwait, Iraq, Iran, Georgia, Armenia, Azerbaijan, the republics (Karachay-Cherkassia, Kabardino-Balkaria, North Ossetia and Chechenia) along the north slope of the Caucasus and a small part of the southernmost Russian federation (cutting through the regions of Krasnodar, Stavropoľ and Daghestan), Kazakhstan, Turkmenistan, Uzbekistan, Kyrgyzstan, Tajikistan2 and Afghanistan.

For seabird records, and records of landbirds at sea, the OSME Region includes the following areas of sea or ocean:

2 Spellings of Central Asian countries in particular vary, mostly because the sounds have been transliterated into English from different original scripts several times in history. For example, we adopt ‘Tajikistan’ because it is nowadays mostly spelt that way in correspondence from that country, but recognise that ‘Tadzhkistan’ is a common earlier alternative derived from Russian usage. This variability of spelling applies to several other countries, but our choices do not imply other spellings are inferior.

3 The OSME Region includes the Halaib triangle, legally part of Egypt but administered by Sudan on the basis of the integrity of ethnic groups therein.