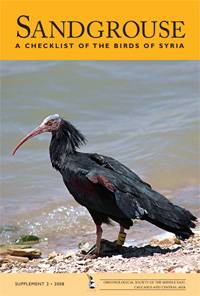 Cover photo: Salam, a Northern Bald Ibis Geronticus eremita, caught on 1 June 2006 near the breeding site in the mountains northwest of Palmyra and fitted with a solar transmitter. She lost her mate in the winter of 2006–2007 but paired with a new bird in 2007 and was paired again in 2008. Her transmitter is still working and has provided priceless information on the feeding sites of the Syrian population of Northern Bald Ibis and its migration route to the Ethiopian highlands. Photo June 2006. © MS Abdallah.

Note: Autumn 2008 through Autumn 2014 contents are available in PDF formats

All back issues apart from the 3 years preceding the current issue are downloadable from the Biodiversity Heritage Library.
For enquiries about back issues please contact membership@osme.org